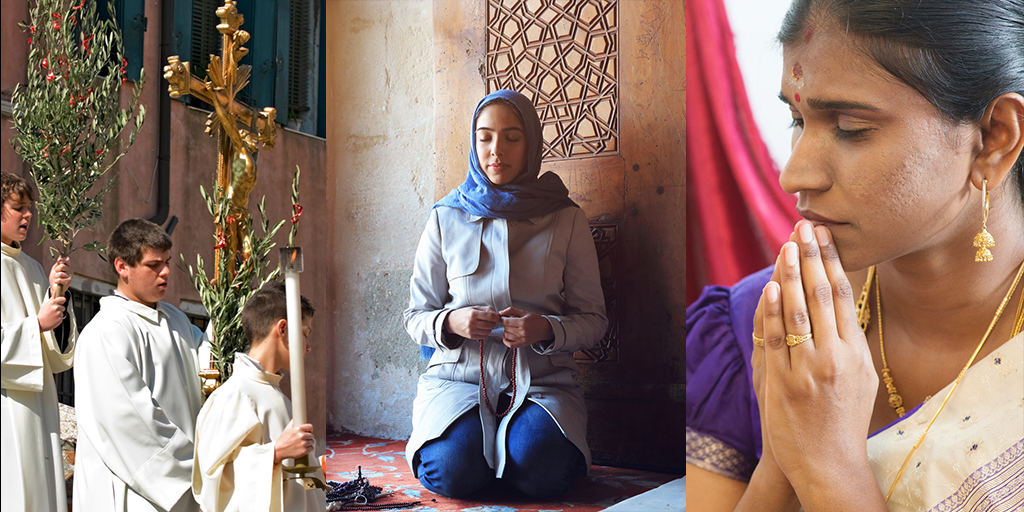 Images of people practicing their Christin, Islamic and Hindu faiths.

April brings the promise of spring, of colorful flowers and greenery! Of everything beautiful in nature, each in its own way! What better month than April to celebrate diversity!

April was chosen as “Celebrate Diversity Month” way back in 2004 by two national diversity companies, ProGroup, Inc. and Diversity Best Practices, to recognize and honor the diversity surrounding us all. By celebrating differences and similarities during this month, organizers hoped that people will gain a deeper understanding of each other. April holds celebrations for different faiths and causes. Let’s look at some:

2nd -11th: Chaitra Navratri, a nine-day festival that marks the first month of the Lunar calendar.

10th:  Ram Navami, a celebration of the birth of the seventh avatar of Vishnu (Lord Rama).

10th:  Palm Sunday, commemorating the entry of Jesus into Jerusalem.

16th:  Lazarus Saturday, commemorating the raising from the dead of Lazarus of Bethany.

14th :  Vaisakhi, a Sikh community celebration of spring and harvest.

15th –23rd: Passover, the commemoration of the emancipation of Israelites from slavery in ancient Egypt.

27th: Yom Hashoah, a Jewish holiday for remembrance of the holocaust.

April 21st –May 2nd:  a Bahai faith Festival of Ridvan.

2nd:  World Autism Awareness Day, to honor the contributions of people on the autism spectrum and the autism community.

8th:  The Day of Silence, to protest the actual silencing of LGBTQ+ students and their straight allies.

13th:  Equal Pay Day, an attempt to raise awareness about the wage gap,

22nd:  Earth Day, to promote world peace and sustainability of the planet.

I belong to the Hindu faith. We just had one of our biggest festivals in March: Holi- the festival of colors, which marks the start of a new year. We enter April in a more meditative mood when we pray for nine days. We call this festival Chaitra Navratri. Chaitra means beginning; Nav = 9; Ratri = nights. So, the New Year begins with nine days of turning inwards, recognizing the Divinity in the whole creation and enlivening that aspect. We worship different forms of Durga, the goddess of Energy, who we also refer to as the Mother. I, too, will be praying and reading verses from an Indian text called Durga Saptashati (means 700). It is an ancient text whose reference is found in other texts around 700BC. Each chapter of this book talks about conquering a vice – need to hear flattery, need to criticize, need to feed ego – to then embark on a fruitful new year.

Every single week of the month of April has some part or the other of our world celebrating, so it is truly apt that April is Celebrating Diversity Month.

Here are some ways you can celebrate too:

As Maya Angelou said, “We all should know that diversity makes for a rich tapestry, and we must understand that all the threads of the tapestry are equal in value no matter what their color.” Happy Diversity Celebrations!

Manisha Sharan has a Ph.D. in Molecular Biology and has been an Adjunct Faculty teaching Health Science courses at Baker College since 2012. She is part of the Baker College DEI Council. Dr. Sharan is active in many cultural organizations in various capacities. She thinks her love for teaching and students is what makes her world go round.