Misjudgement and Empathy: How a First-Generation Greek Immigrant Uses Her Experiences to Uplift Others

I am a first-generation immigrant to this country. My parents moved to the US just before my sister was born. I didn’t speak English until I went to school and as far as I remember, I’ve always been aware of my “otherness.” The way our parents raised us, which is to have pride in our Greek heritage, has always been just that – a source of pride for me, but it didn’t help me feel an overwhelming sense of belonging here.

More complicated than that, I’ve always felt that I have one foot in this world, and the other in the world my parents left behind. This is not an atypical immigrant experience, and probably the type of story you would expect from me: an American named Stavroula Skoutelas Erfourth. By age 8, I was writing checks in the grocery store for my mom, and by 10, I was talking to doctors and anyone else that might call the house. This allowed me to learn empathy early, but it also led to a lot of embarrassment, which I am now ashamed to say. As a kid, you don’t want to be different

Again, this is probably the story you would expect to hear from me. Well, that is all true and a huge part of who I am now, but I actually want to tell you a different story about me. This one is about my experience for a brief period of time as someone with a visible disability and how that altered the course of my life.

When I was 6 years old, I was very active – gymnastics, Greek folk dancing (which I still do), etc. I started to experience terrible pain in my right hip, which my parents assumed was an injury from gymnastics. I was devastated because I LOVED IT. The pain continued and went undiagnosed for about 6 months. I was eventually diagnosed with Legg-Calve-Perthes disease, which is caused by a weakness to the head of the femur (in the hip socket) causing the bone to deteriorate. While rare, it was extremely rare in females and in children as old as I was, which is why it was initially dismissed as a cause.

Needless to say, they were afraid. They could barely speak the language and now had to make a decision on how to treat this issue with two less than preferable options: surgery and over two months of a chest down body cast, or a leg brace. They chose the less invasive option, which for me meant two years of a leg brace and orthopedic shoes. (Wonder no more about the genesis of my love of shoes.)

Well, to a 6-year-old, two years is a third of their life. From the minute I got the brace (and during the dozens of doctor’s appointments, x-rays, and fittings), people started to treat me differently. Kids made fun of me. Adults pitied me, they were a little afraid of me and my condition, but most infuriating of all – they underestimated me. At every turn, people assumed I could not do things for myself. Two years, especially to a kid, is a long time to have people constantly underestimating you.

For that time then, I had to be equally responsible (in helping my parents with adult things like groceries and talking to doctors) while also being treated as incapable by almost everyone else. It was complicated, to say the least. But…It made me empathetic. It made me passionate to try to really listen to people and allow them to tell me what they think. It made me learn not to underestimate people and celebrate them and their uniqueness.

Immigrants, people of color, those otherly-abled…I refuse to underestimate people. What fuels my desire for DEI work is that I believe people are more than we sometimes give them credit for. I don’t want to tell their stories for them, I want to help open a door, provide a platform for people to tell their own important stories. That’s what DEI means to me.

Thank you, my workplace, for allowing me to tell my story. Let’s continue to work toward allowing everyone to tell their story, and really listening to them. Not just here at work, but everywhere in our lives. Let’s not make assumptions about people before letting them tell us about themselves, and let’s not underestimate what they can or can’t do…because of a language barrier or any kind of barrier. Let’s continue to be the kind of people who remove barriers for others and strive for equity.

Dr. Voula Erfourth currently serves as the Campus Director for Baker College of Owosso, where she has worked since 2003. In addition to her work as the Campus Director, Voula serves as the institutional keyholder for IPEDs and as the campus chair of the DEI (Diversity, Equity, and Inclusion) chapter. Outside of Baker, Voula volunteers for many community organizations, including serving as the president of the local hospital’s foundation board. She enjoys time in her car as a soccer mom of two boys, Simon (14) and Leo (10) and a soccer coach spouse (Michael) and while on the sidelines engrossed in a novel. Reading is her true passion. Voula also stays very active in her Greek culture through preserving family recipes, traveling to visit family in Greece, and Greek folk dancing. 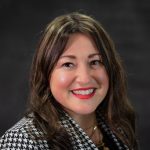