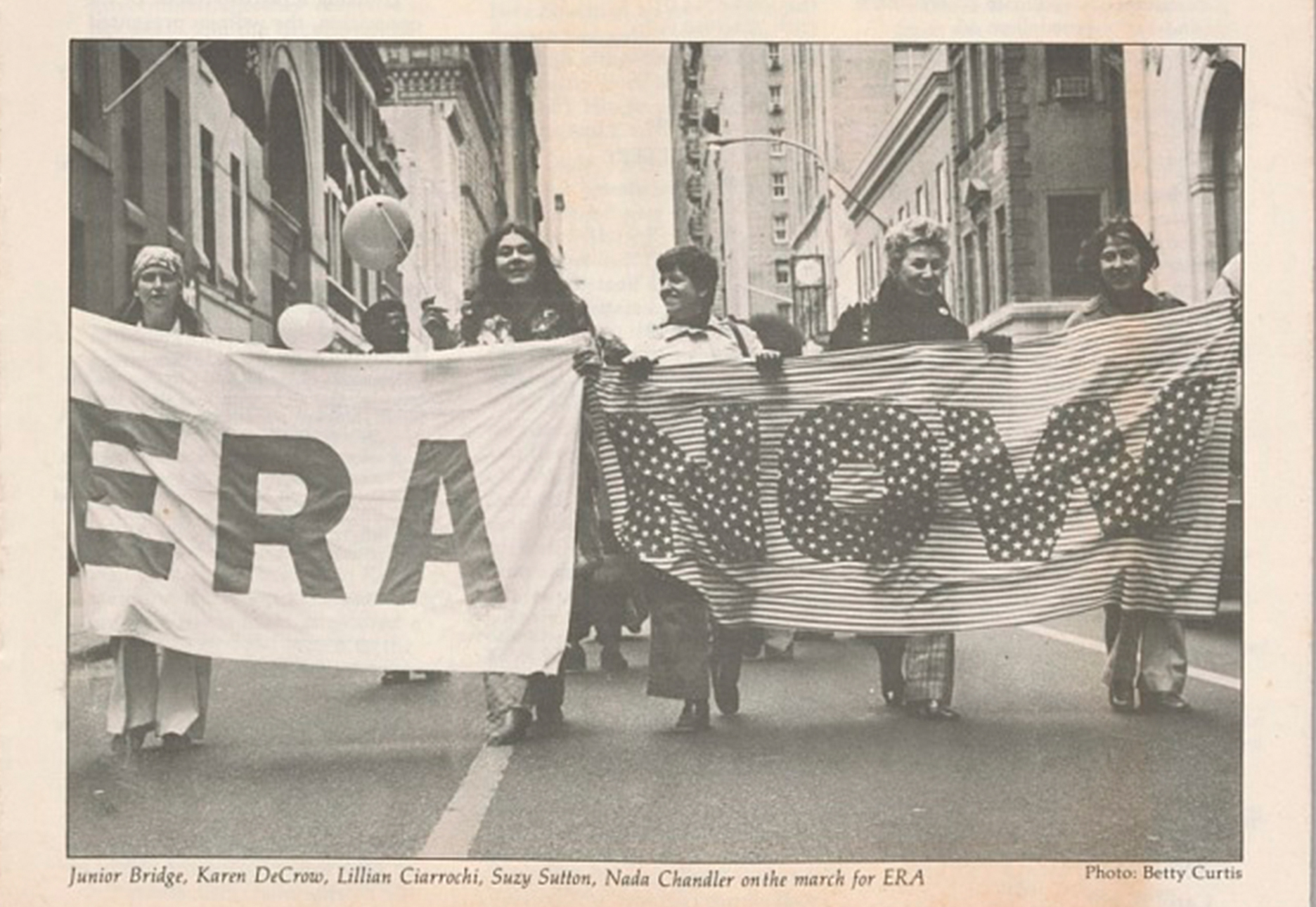 Image of women marching for the ERA from an issue of the National Organization for Women newsletter, Do It Now, May 1976, Volume IX, No. 4.

“Voting is not only our right, it is our power. When we vote, we take back our power to choose, to speak up, and to stand with those who support us and each other” Loung Ung, Cambodian- born American human rights activist and lecturer.

In less than 3 months, we will have the opportunity to use this power. This is a power that many would not have had if it were not for the thousands of individuals who, in the not-so-distant past, fought for the right to choose those who represent and lead us. It was 100 years ago on August 26, 1920, after a 72-year-old struggle, that the 19th amendment was added to the U.S Constitution and women were allowed to vote.

The Women’s Suffrage Movement began in 1848 at the Seneca Falls Convention in New York.
Five, white abolitionist women, Elizabeth Cady Stanton, Lucreatia Mott, Mary McClintock, Martha Coffin Wright and Jan Hunt, organized the first woman’s rights convention in order to “discuss the social, civil, and religious condition and rights of women” (Civil Rights Act of 1964, 2020). Although no black women were invited to the convention. In 1851, at a women’s rights convention, an African American abolitionist and racial equality activist, Sojourner Truth, gave a speech entitled “Ain’t I a Woman too.” This brief but powerful speech gave rise to the recognition that all women had the right to vote (Brown, 2018). The movement, though facing many financial barriers and much opposition, grew in number to tens of thousands. The women traveled the country making speeches, circulating petitions and publishing newspapers. Many of them experienced ridicule, harassment, and attacks by mobs and the police. Many were incarcerated and treated brutally as they protested (National Women’s History Alliance, July, 2019). Still, they persisted.

Prior to the women’s suffrage victory, it took a civil war and two amendments to the Constitution to extend the vote to the black male population. Even with the adoption of the 13th, 14th and 19th amendments, laws were enacted by many states placing various barriers preventing the black population from casting their votes. It was not until 1965 with the passage of the Voting Rights Act which prohibited the unequal application of voting requirements, did all citizens, male and female, truly gain the power of the vote (Seneca Falls Convention begins, 2020). The fight, however, is not over. Across the United States, citizens are still facing barriers to exercise their voting rights. The Carnegie Corporation of New York (2019), explains that many barriers disproportionately affect people of color. Some of the most current barriers are listed below:

While barriers still exist, women overcame the struggle. Women winning the right to vote, and therefore the ability to hold public office, was a long and difficult struggle. The same work continues today in the struggle for women to have full equality under the law. The Equal Rights Ammendment (ERA), which states: “Equality of rights under the law shall not be denied or abridged by the United States or by any state on account of sex” was first drafted in 1923 and has not yet been adopted into the constitution (Cohen & Codrington, 2020). The version of the ERA, as stated above, was adopted by Congress finally in 1972 but by 1977 only 35 states had ratified it. Ratification by 38 states is required to add an amendment to the Constitution. Recently, Virginia was the 38th state to ratify but the deadline had expired. Five states are also now wanting to rescind their earlier support (Cohen & Codrington, 2020). Cohen & Codrington III (2020) explained that the adoption of the ERA as the 28th amendment to the constitution now hinges on two procedural questions: “First, can Congress act now nearly 48 years after proposing the ERA, to waive the lapsed ratification deadline?” (para. 22); and, “Can states rescind their support of a Constitutional amendment prior to final ratification?” (para. 23).

So how much longer will it take? How much longer will equality and equity for all become a reality in our United States? In June of 2019, U.S. representative and civil rights leader John Lewis (1940-2020) stated, “ I have said this before, and I will say it again. The vote is precious. It is almost sacred. It is the most powerful non-violent tool we have in democracy” (McCarthy & Gralki, 2020). We must use this sacred, powerful tool, the vote, if we are to realize equity for all in all aspects of our society.

Please vote in the upcoming elections!

Susan B. Anthony’s speech be before the courts in 1873
https://www.youtube.com/watch?v=T57dwhJBtts

And if you are interested in learning more about the continuing work for women’s rights, check out some of the following state, national and international women’s organizations. Many have chapters throughout the state of Michigan.