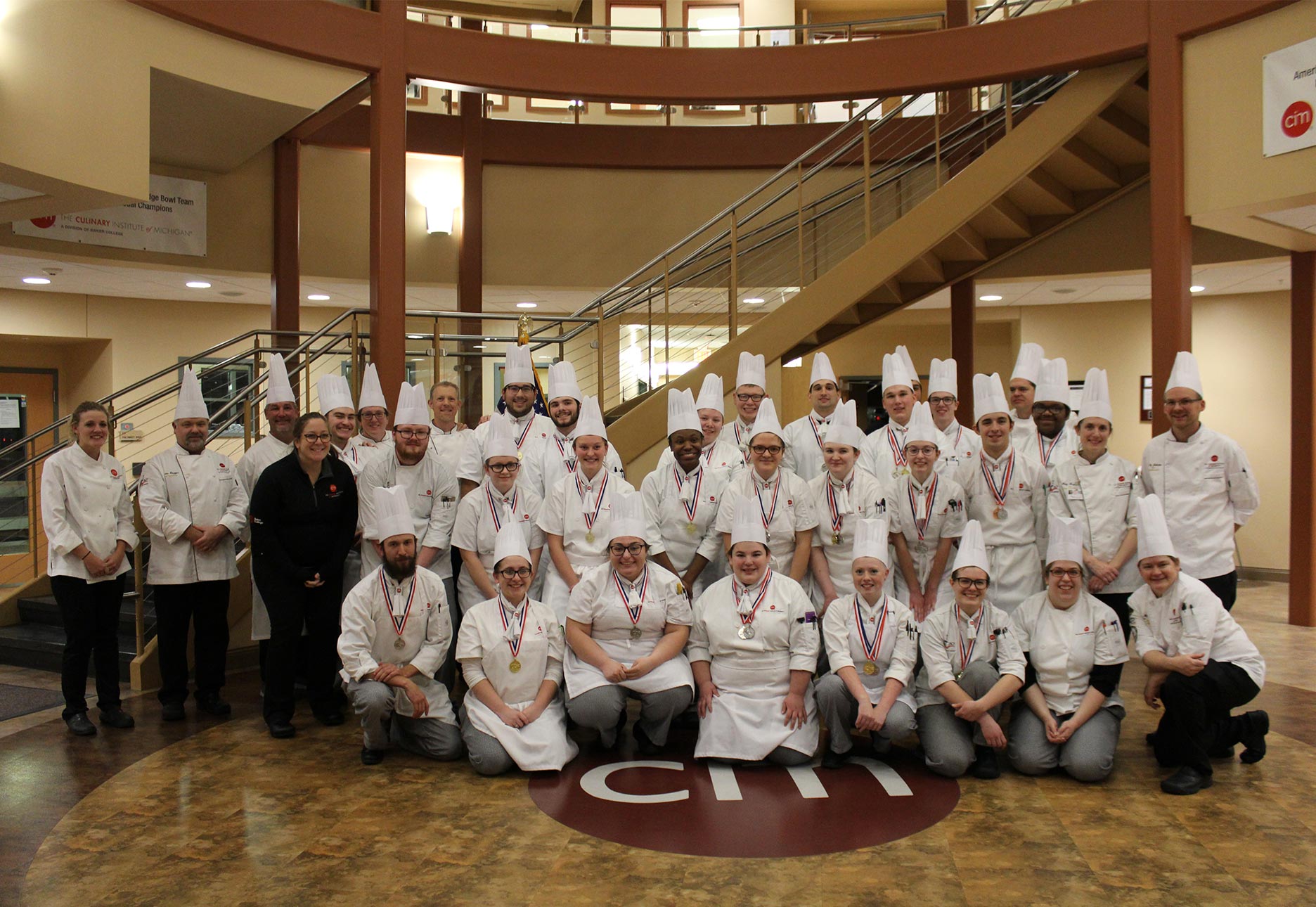 CIM student and faculty competitors from the Muskegon and Port Huron campuses.

CIM Teams from Port Huron and Muskegon Campuses Win Multiple Awards, Including Some Gold with Distinction for Perfect Scores and Additional Best-in-Show Honors

Twenty-seven student chefs and eight instructors from both the Muskegon and Port Huron, Mich. campuses of the Culinary Institute of Michigan (CIM), a division of Baker College, earned a variety of honors at an annual American Culinary Federation (ACF) sanctioned competition held Nov. 9, 2019 at the CIM Muskegon campus.

The students and faculty members competed across a variety of categories, which tested their skills in both cooking and baking/pastry.  Every student and instructor who competed earned at least one medal.  Collectively, the 19 students from CIM Port Huron and eight others from CIM Muskegon together earned a total of 33 medals: four bronze, 18 silver and 11 gold, including two gold with distinction for perfect scores.  Four of the medals also included best-in-show honors.  The eight competing faculty earned eight medals: one bronze, three silver and four gold, along with two best-in-show distinctions.

The CIM student chefs and faculty competed alongside Michigan students from the Macomb Culinary Institute at Macomb Community College and the Dorsey Culinary Academy.

The Nov. 9, 2019 event was especially significant to the CIM team, as the competition followed an emotional tribute to beloved former CIM Dean of Culinary, the late Chef Bruce Konowalow, MA, CCE.  In a special ceremony, a key facility resource at CIM Muskegon was renamed in Chef Bruce’s honor, now known as The Chef Bruce Konowalow Advanced Skills Lab.

“What better way to celebrate and honor the memory of Chef Bruce and his commitment to excellent student outcomes than to have CIM students from both campuses competing side by side and winning 33 medals,” said Chef Tom Recinella, CEC, AAC, HGT, Baker College’s Dean of Culinary.  “Every single CIM student that entered the competition won a medal, some two, and so did every single CIM faculty member who competed.  The judges were blown away by our team’s performance, which is saying an awful lot since these professionals judge competitions all across the country.  I couldn’t be prouder of our effort, and I know Chef Bruce would be as well.”

The CIM teams host and compete in ACF open category sanctioned competitions twice annually, one at each campus location, in addition to various state, regional and national ACF competitions.

For a complete list of competition medalists from CIM Port Huron and Muskegon, please see the following summary:

Distinctions:
* Category best in show
** Gold with distinction for a perfect score.