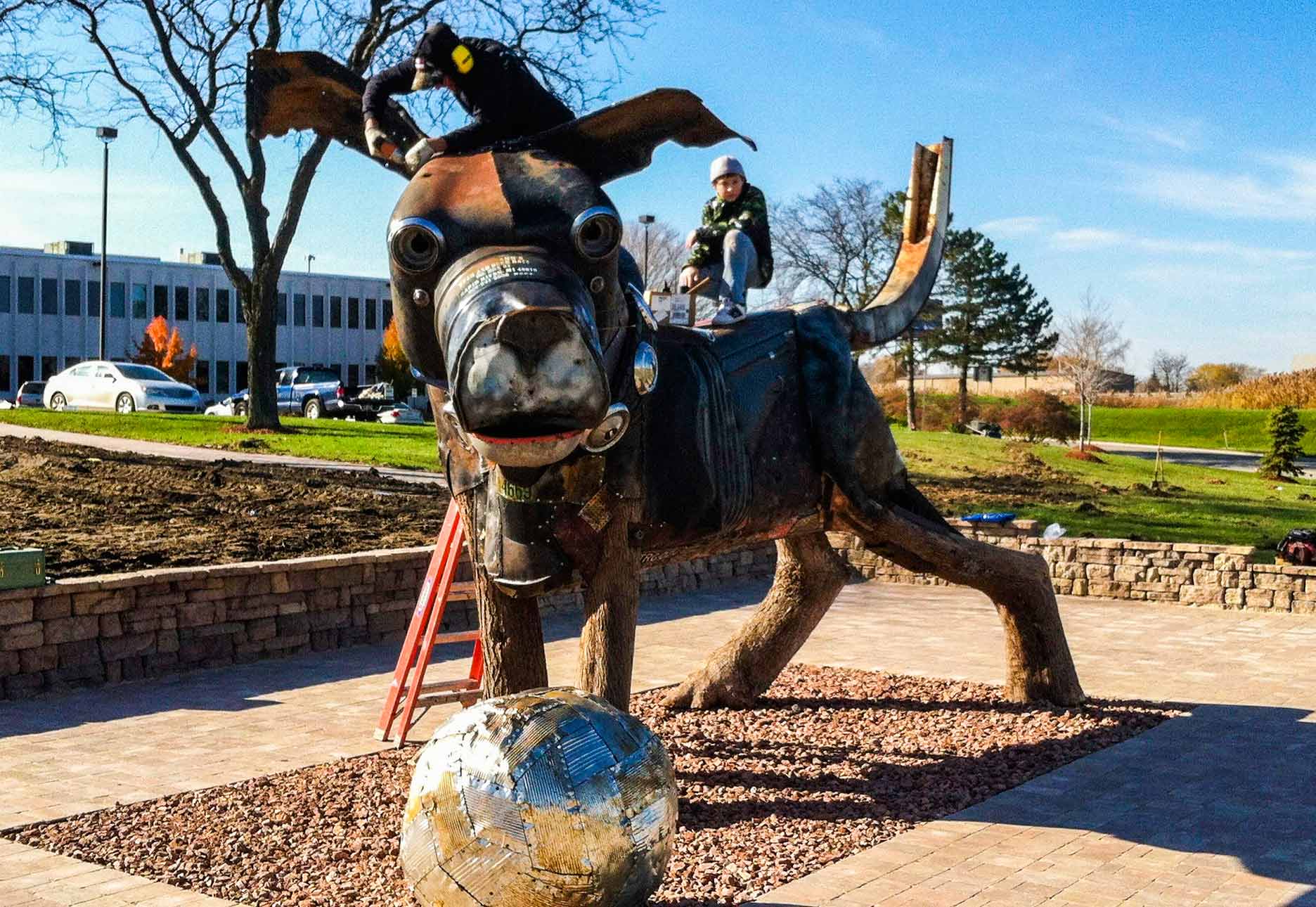 Art piece, Rusty, being set up at Baker College of Allen Park in 2011

Rusty, a mixed material art structure previously located on the Baker College of Allen Park campus, has found its new home with the City of Allen Park. Rusty was created in the summer of 2011 by artist Ritch Branstrom for the ArtPrize competition in Grand Rapids, Michigan.

The art piece consists of tree trunks, automotive parts and farm materials and stands 12 feet high and 19 feet across. Rusty plays with a silver ball constructed out of cans saved from the Rapid River School hot lunch program.

The sculpture was an audience favorite at ArtPrize and placed fifth in the competition out of 1,582 entries. Dr. Aaron Maike, President of Baker College of Muskegon, was campus president of Allen Park when the campus purchased Rusty.

“Rusty was a mesmerizing figure at the 2011 ArtPrize, drawing large crowds, placing in the final round top 10, and ultimately landing in 5th place,” Maike said. “We felt that he would provide an excellent ‘art in public places’ experience in the Allen Park community and that he would fit well in the large grassy entrance area at the Baker College Allen Park campus.”

“With the announcement of the consolidation of the AP campus, then Allen Park mayor Bill Matakas, also a very close personal friend and fellow Rotarian, contacted me about the City acquiring Rusty,” Maike explained. “Bill’s wife, Phillipa, was a huge fan of Rusty when we acquired him. After a few phone conversations, we agreed that the City would take Rusty prior to the sale of the AP campus and eventually place him in a city park. The Allen Park city and community was always very supportive of Baker College, and Baker College thought that donating Rusty to the City would continue our almost 20-year relationship.”

Allen Park community members have enjoyed the piece for years and are excited to welcome Rusty to his new Forever Home. “Rusty is a local landmark for the community and looked upon with pride for Baker College students,” said Dawn Huntley, Allen Park resident. “It’s a beautiful piece, and we’ve enjoyed seeing the chemical reaction of the metal with weathering through the years.”

The structure, weighing 3,100 lbs, has been moved to the property that will eventually become the Allen Park DPS Facility – about 900 feet east of his former home. City officials have discussed creating a park at the location.

“There has been a fair amount of internal discussion to create a dog park in front of the Allen Park DPS Facility on the approximate two acres of land that is located in Melvindale, the area closest to Outer Drive,” said Allen Park City Administrator Mark Kibby. “I believe this park will eventually be created, but it is likely 3-4 years down the road.”

More work is needed to go into the property before it’s ready to be opened to the public as a dog park, however, news leaked out to the community through a local Facebook Group page, and the plan received a warm reception from residents.

“We are pretty sure that Rusty is excited with the idea that one day soon, he will have many friends playing in his yard.”